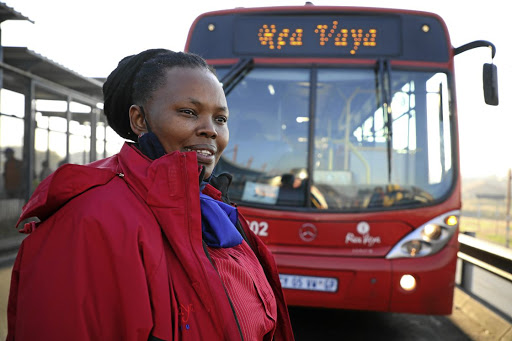 It’s 6.30am and Elias Motsoaledi Road in Soweto is bustling despite the lockdown being on Level 4.

The Rea Vaya bus station in Thokoza Park is a hive of activity. Commuters have been
instructed to queue outside the bus station and only a specific number are allowed inside.

Each commuter is required to wear a mask and have a work permit.

Bus driver Zanele Mavuso has taken it upon herself to ensure that commuters adhere to the social distancing regulations and that they are wearing their masks all the time.

The mother of two prays for protection every day before leaving her house. She is one of the thousands of people who work in the transport industry, ensuring that essential workers are able to get to and from work.

“If someone removes their mask and places it on their chin, I instruct them to put it back. If I am driving a small bus, like the F12 [Parktown route], I don’t allow commuters on board without a mask. I would rather get reported to my employer,” she said.

Mavuso initially wanted to be a truck driver but felt she would be better suited behind the wheel of a bus. “I like interacting with people. My job gives me pride because I play an important role in the lives of thousands of people. I make sure they get to work on time.

Mavuso started driving Rea Vaya buses in 2015 after completing a learnership at City to City buses. Her shifts dictate which of the 21 routes she will be on.

“I have my mask, I sanitise my hands often and wash them as well. But I pray on top of that because nothing defeats prayer,” she said.

On a normal day, an articulated Rea Vaya bus ferries around 119 passengers per trip, but this figure has dropped to 23 as per Covid-19 regulations in the transport industry.

Mavuso also drives the T3 Express from Thokoza Park to the Johannesburg CBD, which makes no stops in between Lakeview station and Croesus, cutting a commuter’s travel time by at least 15 minutes.

Mavuso’s first trip of the day is at 5.20am. At 8.25 she goes on a four-hour break before her shift resumes and runs until 7pm. Mavuso considers herself lucky because her two children have been in KwaZulu-Natal with her sister who is a teacher since the lockdown began.

“There isn’t much of a lockdown in the township. You see people roaming around during the day,” she said.

For taxi driver Abram Maditsi, the going gets tougher by the day. The 65-year-old has been a taxi driver for more than 12 years and his business has never been affected so severely before.

Maditsi, like most taxi operators, has wrestled with the question of whether he should fear Covid-19 or if he should fear going hungry. He met Sowetan at the taxi rank in Diepkloof, Soweto, early on a Thursday morning.

“You can either stay at home and not have anything to eat or you can work for a fraction of what you’re used to earning and live,” Maditsi said.

He brings into focus the amount of money he makes from carrying passengers to the MTN Taxi Rank in Johannesburg, lamenting the economy grinding to a halt.

“Before this lockdown I used to give the taxi owner R5,000 a week. I haven’t made that sort of money since March. Now, I have to wait a few days to make half of that,” he said.

Maditsi is permitted to carry 10 passengers per trip. But the wait for those 10 passengers has increased because people are not going to work.

A full load in his taxi is 15 passengers who pay R12 a head. That load has decreased to 10, and so have the number of trips.

“You could make about five to six trips per morning on a normal day but now I make about two trips, which is roughly R480. Some of that money goes towards petrol and my sustenance.”

His association, Diepmeadow Taxi Association, has split shifts between drivers, dividing them into 12 groups.

“These groups alternate every day so that everyone gets to make a living.

“We all take turns to work so that we can have something to eat,” he said.Image:

Maditsi is always nervous about the prospect of contracting the virus. One of his three children who works in the Joburg CBD often checks on him when he is in town because she worries about him.

He takes precautions by ensuring that his passengers are wearing masks and that their hands are sanitised before hopping into his taxi.

“We often have nurses and sometimes police officers as passengers and money is passed from one person to the next. If one of them has the virus, it means that it will be easier to spread it in the taxi. You’ll never know who has it,” he said.

“It’s a bit pointless because social distancing does not really exist inside the ranks. People are usually huddled up in groups of about four to five.”

Maditsi hopes President Cyril Ramaphosa will lift the lockdown so they can make a decent living. “Maybe if he brings it [lockdown] to Level 3, which allows more people to go back to work, we will be able to live again,” he said.

Tumelo Segobele, 34, an Uber driver based in Lindhaven, said he longer parked in the streets waiting to be called to pick up clients but did this from home because of the lockdown.

The father of two has also resorted to keeping away from his two children, who live with their mother.

“I can’t afford to infect them in case I have it. Sometimes you don’t know that you have it unless you fall sick or if you get tested because someone you came into contact with has it. It’s better for me not to see them,” he said.

Segobele has been a driver for five years and has worked throughout the lockdown period.

Like many of his colleagues, he has been unable to provide for his children.

“Sometimes when I am out for a trip I see some of my colleagues parked at parking centres for hours without getting any customers,” he said.

“We hope this virus blows over so that things can get back to normal.”

For David Molelekeng, a metered taxi driver, the situation is no different. He has had his monthly income slashed by more than half. He now makes around R900 a month.

Molelekeng can be found milling about at Westgate Mall’s entrance 5, where he and about 10 other drivers wait for passengers. Each taxi makes two trips per day at the most, after hours of waiting.

“People don’t use meter taxis that much anymore. We used to make a good income, but Uber and Taxify have taken most of our passengers, and now this virus has added to our miseries. On top of that, I can only load two passengers at a time,” he said.

” If I catch the virus then I will have to accept and deal with it.”